The Mariposa County Recorder's office is open Monday through Friday from 8:00 am to 5:00 pm. Our recording hours are from 8:00 am to 3:30 pm, Monday - Friday. We are located in Mariposa, in the Hall of Records Building near the historic courthouse. 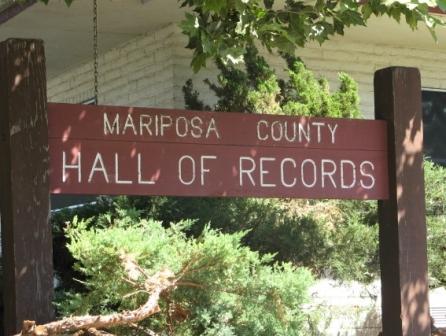 Functions of the Recorder's Office

This office records documents and files maps, maintaining cross-reference indexes to these records. Documentary Transfer Tax is collected on transfers of real property.

Recorded documents are scanned / microfilmed as a permanent record and the original document is returned to the customer after scanning. All records are indexed by the names of the principal parties to the document and by the year recorded. The records are open for public inspection and copies may be purchased from this office.

Examples of typical recorded documents are:

On September 9, 1850 California was admitted as the 31st state and one of the first acts of the legislature was to adopt a recording system. Under the Spanish and Mexican governments there were no statewide registry or recording laws, so it was necessary that some device be created by which evidence of title to, or an interest in land could be collected in a convenient and safe public place. The system allows persons intending to purchase or otherwise deal with land to be informed as to the ownership and condition of the title, and be protected from secret conveyance and liens.

This system provided for the indexing of the names of parties to the document in volumes and the copying of the actual document into separate volumes. This copying was done first by hand and in later years by typing and then by filming.

Separate sets of indexes and volumes were provided for each type of document. Government Codes 27232 through 27254 presently list 21 different types of indexes that the Recorder shall provide for.

This system of indexing became cumbersome as the volume of recorded documents grew and in 1921 the legislature provided that a combined General Index could be used by the Recorder to index all types of documents.